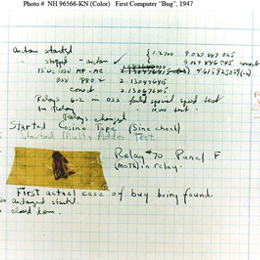 Have you ever wondered where the internet terms blog, debugged and boot came from?

Where did the internet terms blog, debugged and boot originate from?

Debugged – The term debugging dates back to 67 years ago, when the first machine was debugged on September 9, 1947. The gargantuan Mark II Aiken Relay Calculator (one of the first existing computers), located at Harvard University, started experiencing problems. After investigating the machine, a moth was found trapped between points of relay #70, in Panel F. The bug was removed from the machine and conversation began about the machine being “debugged”, hence the term “debugging a computer program” was born.

Blog – Jorn Barger coined the term weblog on December 17, 1997. Barger began posting daily entries to his Robot Wisdom site in hopes of finding an audience that would share in his same interests. He would call the continued process as logging the web, creating the word weblog by conjoining the two terms web and log. The name later evolved into blog, by Peter Merholz in 1999, when he jokingly broke the word into the phrase We Blog in the sidebar of his Peterme.com blog.

Boot – The computing term boot comes from the old saying “pull yourself up by your bootstraps”. A bootstrap is a loop of material sewed to the top rear of a boot to help in pulling the boot on. As a bootstrap helps get you up and running, a boot or reboot helps, get your computer loaded and operating.